Last Call: The Rise and Fall of Prohibition 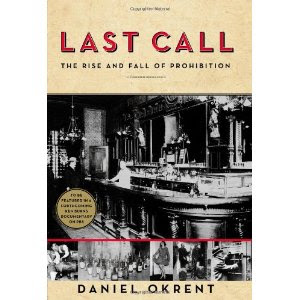 The story of the prohibition of alcohol in the United States from 1920 to 1933 is an extraordinary piece of social and political history, and nobody tells it better than Daniel Okrent in a fantastic new book, Last Call: The Rise and Fall of Prohibition, just published in the US and available in the UK via Amazon.

The prohibition lobby was closely linked in its early days both to the evangelical Christian right and the Ku Klux Klan and to women's suffragists, supporters of income tax and trade unionists, though by the time that the Catholic Al Smith became Democrat Presidential candidate in 1928 the former wing was much stronger. Their opponents in the drinks trade boxed themselves into a reactionary mode by rejecting these liberal causes, particularly women's suffrage, ensuring that women supported the alcohol ban by as much as 9-1.

But the impact of prohibition was profound on the US: not just the rise of organised crime through the Chicago bootleggers, but through changes to the fabric of American life in many ways from the growth of night clubs where women could drink through to the election of FDR and his ability to effect the New Deal. The cast of characters associated with the propagation of prohibition and its undermining was legion, and the second camp included most immigrant communities whose Democratic support was cemented at this stage, respectable Scottish distillers in cahoots with Canadian exporters and high society industrialists whose opposition led to repeal through to supporters of prohibition whose shameless blackmail of often 'wet' politicians has rarely been seen before or since.

Meanwhile, the number of legal and illegal ways of bypassing the law grew including: booze cruises outside an expanded 12 mile coastal limit, the growth of Havana, a new prosperity for the Bahamas, Cunard liners, legal farmhouse cider, communion and Jewish sacramental wine (creating a lucrative Californian vineyard replete with guesthouses for visiting priests and rabbis), alcohol for 'medicinal purposes', tonics for women (some created by leading drys), imports from Canada and various bootlegged and mixed versions of industrial alcohol. True, alcohol consumption fell, but the law was so widely flouted and created so much new crime that its repeal was inevitable.

Okrent tells this amazing story from the birth of the prohibitionists in radical politics through the growth of the Anti-Saloon league and its split opposition in distillers and brewers who couldn't agree among themselves on tactics through the movement of upper class women that finally led to repeal. It is one of the most readable and jaw-droppingly entertaining histories I've read in ages.
Posted by Conor Ryan at 14:55:00