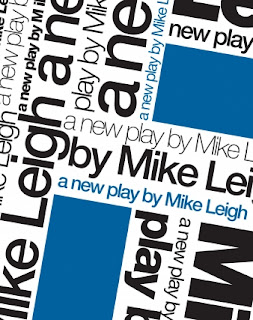 The stultifying world of late 50s suburban middle class respectability mixed with the memories of wartime loss is the setting for Mike Leigh's remarkable new play, Grief, which has its first out-of-London run at Bath this week. Lesley Manville plays Dorothy, a war widow trying to bring up a 15 year-old girl Victoria (played by Lark Rise star Ruby Bentall) in a household shared with her soon-to-retire brother Edwin (a fine buttoned up turn by Sam Kelly).

The two-hour play, which runs with no interval, follows a series of events from autumn 1957 to summer 1958, as Victoria is supposed to be preparing for her O levels and Edwin faces retirement. Special days like Christmas, New Year and birthdays are intertwined with occasional visits from their friends. Each vignette takes place in the living room, where the only real communication between Dorothy and Edwin is through old songs beautifully rendered by Manville and Kelly, and where the chasm between mother and daughter grows ever wider. There are a remarkable number of scene changes, each adding to our understanding of the characters, and all leading to a terrible denouement. We were treated to an after-show discussion with Leigh and his cast last night, and the most fascinating revelation from Manville was that the set behind the stage contained furnished bedrooms to give the upstairs events that we only ever hear a firmer grip on reality. With a fine cast, this is an excellent new play.
Posted by Conor Ryan at 11:48:00

I was torn in my interpretation of the final scene. Do you think Edwin was mortified/rigid with horror because he was just an emotionless drone who had been de-sensitised by his dull work and home life, or guilty because he may have abused Victoria and be horrified at what now may ensue ...

obviously none of the broadsheet reviewers mentioned the possibility because it would constitute a massive spoiler , but it was my first reaction.