I argue in a new Centreforum report that university endowments can make a contribution to postgraduate funding.

Sutton Trust research has highlighted the growing importance of postgraduate degrees in today’s labour market. Stephen Machin and Joanne Lindley have shown that 11% of 26-60 year-olds in the workforce now holds a postgraduate qualification, up from 4% in 1996.[1] 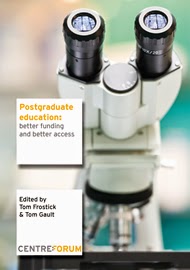 They also showed that somebody with a Master’s can on average expect to earn over £200,000 more over a 40 year working life than someone only holding a Bachelor’s degree.[2] The Sutton Trust report highlighted how the recent growth in UK postgraduates, dominated by international students, poses a threat to social mobility.

This makes it all the more important that postgraduate courses are affordable to the brightest graduates, regardless of financial circumstances. Universities and government need to think imaginatively about how to fund them. Without action to enable bright students from all backgrounds to access postgraduate qualifications based on their ability rather than their ability to pay, this could become yet another barrier for those from low and middle income homes.

Tim Leunig’s earlier research for Centreforum has shown that while there is some funding available through university bursaries, research councils and other sources, fewer than 4% of students on taught master’s programmes receive sufficient funding to cover their fees in full.[3] Most universities offer some partial bursaries, but these are often a fraction of the costs of fees and living costs, which can be £18-£20,000 a year, depending on the course.[4] This is an expensive proposition for graduates with debts already set to exceed £40,000 from their undergraduate studies.

In the United States, many universities, including the Ivy Leagues, fund undergraduates from low and middle income homes fully through their endowment funds. Many also use their endowments to provide targeted support for postgraduates (as well as to develop new buildings and facilities, often their primary purpose in the UK.)

With a state regulated system of undergraduate fees and loans in the UK, and substantial mandated access funds linked to the new fees regime, there is a strong case for focusing a growing endowment pot on postgraduate studies and research. For this to happen, UK universities need to grow their endowments. Only Oxford and Cambridge currently have endowment funds comparable in size to the top 20 US universities, with the next largest, Edinburgh, significantly smaller at £248m.[5]

The 2004 Thomas report led the Labour Government to introduce a match-funding scheme designed to stimulate greater fundraising by English universities from alumni, and the development of larger endowment funds.[6] That scheme, which ran from 2008-11, had some success: annual fundraising by UK universities rose from £513 million to £694 million.[7]

But the potential is much greater. While US Ivy Leagues have always had large endowments, much American alumni fundraising is relatively new. Many state-funded universities have only developed their funds in the last 50 years: for example, the University of Florida increased its annual donations from $2m in 1976 to produce an endowment fund now worth $1.3 billion.[8]

Only 1.2% of UK graduates donate to their universities regularly, compared with 9% of US alumni. A Higher Education Funding Council for England report in 2012 proposed a target of 5% for the UK within the next 10 years, with some universities achieving double digit rates, to put the UK onto the US track.[9]

Explicitly linking some of those funds to support for postgraduates could make giving more attractive to some donors. Some universities already do this. Sheffield has alumni fund scholarships, funded by donations from 1500 alumni each year, worth £2000 each, and targeted at bright students who might not otherwise be able to study there.[10] However, such scholarships remain small scale: in 2013, they plan to provide them to 15 students, but only provided 6 in 2012.[11] Others with larger endowments say they are relatively generous. Oxford, with £3.7 billion in university and college endowment funds, says that 62% of its research students and 17% of its students on taught Master’s courses receive full scholarships covering fees and living expenses.[12]

Such endowments may not cover all postgraduate costs, but they could make a significant contribution, when coupled with targeted student loans for those of modest means. Sheffield targets its scholarships to those who received maintenance grants as undergraduates. A similar approach more widely applied to those able enough to study as postgraduates would help ensure such support was well targeted where it was needed most.

Government may not want to cover the full cost of postgraduate studies and living costs, given the prevailing climate. While wealthier UK and overseas graduates may be able to turn to family funds, those for whom a postgraduate degree is the final rung on the social mobility ladder are unlikely to have access to such resources. Such students should have access to more means-tested bursaries, funded by universities through alumni fundraising. For that to happen, universities will need to improve their fundraising capacity. Government should make it easier for them to do so: the tax system needs to be simpler for large donations, and more pump priming should be available to enhance fundraising capacity.

Postgraduate studies are the next social mobility frontier. It is now widely accepted that we need to do more through nursery education, schools and undergraduate access to enable bright young people from low and middle income homes to fulfil their potential. They must not encounter a brick wall when it comes to postgraduate study. A new partnership between alumni, universities and government could help ensure they don’t.

The Centreforum report Postgraduate Education: better funding and better access is edited by Tom Frostrick and Tom Gault and available at the Centreforum website.

[1] Stephen Machin and Joanne Lindley, ‘The Postgraduate Premium’, Sutton Trust 2012
[2] This is a gross figure, so it doesn’t allow for lost earnings, fee costs, extra taxes due or inflation, as some other analyses showing smaller premiums have done.
[3] Tim Leunig, ‘Mastering Postgraduate Funding’, Centreforum 2011
[4] Cambridge suggests these figures for most courses at http://www.admin.cam.ac.uk/students/studentregistry/fees/costs/coursecost/costs2013v9.pdf . Taught course fees for home or European students at Sheffield and Newcastle universities are typically £5000-£6000 a year, with research fees starting at around £4000 a year, but often much higher depending on the course.
[5] http://www.suttontrust.com/research/university-fundraising-an-update, drawing on data from ‘Caritas Higher Education Yearbook’ data in the UK and the US ‘Chonicle of Higher Education’.
[6] ‘Increased Voluntary Giving to Higher Education’, DfES, 2004,
[7] ‘Review of Philanthropy in UK Higher Education’, HEFCE, 2012 http://www.hefce.ac.uk/media/hefce/content/pubs/indirreports/2012/philanthropyinukhe/HEFCE%20Philanthropy%20Report.pdf
[8] ‘Increased Voluntary Giving’, p.25 and University of Florida website for latest data http://www.uff.ufl.edu/AboutUFF/Endowment.asp
[9] ‘Review of Philanthropy’
[10] http://www.shef.ac.uk/ssid/finance/alumni
[11] Information supplied by University of Sheffield. The University also uses alumni funding to provide £3000 scholarships for undergraduates.
[12] http://www.ox.ac.uk/feesandfunding/prospectivegrad/scholarships/ and http://www.ox.ac.uk/about_the_university/facts_and_figures/
Posted by Conor Ryan at 10:53:00