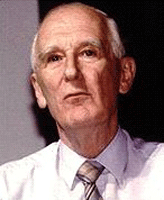 Few figures in the education world can have been so instinctively sensible and universally respected as Ron Dearing, who died last week. I first met him in 1996 when David Blunkett had agreed with Gillian Shephard on a cross-party committee to investigate university funding. Despite the Tories' dishonourable stance later, Shephard was very clear that she wanted the committee to introduce tuition fees, and their inevitability was accepted at that stage by both Labour and the Liberal Democrats.

A former civil servant and Post Office chief executive, Ron was the right person for such a fraught job, and though David tweaked the formula for fees after his report so that it reflected Labour's manifesto commitments, his was a landmark investigation on a par with Robbins in the sixties. He had already saved the national curriculum from overload and produced a (less happy) set of recommendations for the reform of A levels. And he made a good contribution to the House of Lords in later life.
My last discussion with Ron was eighteen months ago when aged 77, he was in the process of producing a typically pragmatic report on modern foreign languages (which resisted the absurdity of compulsion for all at GCSE, while seeking to find ways to make them the norm for most). In all my dealings, I was deeply impressed by his sense of integrity and his ability to cut quickly to the heart of a problem. He will be sorely missed.
Posted by Conor Ryan at 15:26:00