I have written a feature analysis piece for the September edition of Public Finance on the development of academies and free schools in the future. You can read the article here.
Posted by Conor Ryan at 14:03:00 No comments:

Early GCSEs are no scam

Today's Telegraph and Mail have found a new target in their relentless battle against the achievements of our schools and young people: the early GCSE. They tell us (with some encouragement from the exam boards, it would seem) that the main reason schools enter their students for exams early is to 'play' the league tables. This is not the case. The practice was actively encouraged for bright students, so that some they might be stretched, just as a growing number of schools have students taking AS levels a year early too. One of the most inspiring classes I ever visited was a 15-strong AS Maths class of 15 year-olds in North Liverpool Academy, a place I should imagine is entirely alien to those who try to concoct new ways to do down students each year. These were young people from some of the most disadvantaged communities in the country. Schools were actively encouraged to do this as part of Labour's 'gifted and talented' drive. Another reason why schools do some GCSEs early is to encourage young people to do a wider range of exams, and to show them that they can achieve. Others do use it is a practice run. Yes, some schools will bank the GCSEs early, but their motive is not just about the tables, it is as much about widening the achievement of their students and stretching them. But that is perhaps too noble an explanation for the shrill voices of the Tory press.
Posted by Conor Ryan at 09:19:00 3 comments:

The danger of dumbing down GCSE statistics

Damian Hinds, a Conservative MP, tells us this morning that a set of figures he has compiled from Parliamentary Questions 'show categorically how, over 13 years, the last Labour Government undermined the lifechances of a generation by steering them away from the subjects that employers value most.' Having been a part of that Government's education policy for six of those 13 years, I must have missed the deliberate steering.

It is true that - in line with the approach generally advocated by the Conservative front bench towards the National Curriculum - Estelle Morris removed compulsion in modern foreign languages for 14-16 year-olds, in order to focus more on 7-11 year-olds and to allow a disaffected minority to pursue vocational options. But then it is equally true that a concerted drive from 2006 by Labour ministers to encourage take-up in STEM subjects has halted a decline that began under the Conservatives in subjects like Physics and has led to big improvements in take-up of science and Maths subjects at A-level and GCSE for five years. It is also the case that when it became clear that there was some 'gaming' going on as a result of GCSE equivalences - equivalences that had been recommended by independent advisers for courses that at the time had little take-up - the Labour government shifted the main GCSE measure from 'any GCSEs and equivalents' to one that includes English and Maths.

That remains the main measure by which the Government judges schools; and under it, the number of schools with fewer than 30pc of pupils gaining five good GCSEs including English and Maths fell from 1600 to fewer than 100 last year. Michael Gove has raised the benchmark in response. And the proportion of pupils gaining five good GCSEs (or equivalents) including GCSE English and Maths rose from a 35% in 1997 to 54% in 2010. Indeed even if one focuses just on GCSEs and excludes all equivalent qualifications, the proportion is 49.5%, still a substantial and real improvement.

So, it is simply nonsense to suggest that Labour was engaged in some elaborate dumbing down exercise. Indeed the Labour government maintained and strengthened the Standards over Time work started by the previous Conservative government. Labour's main interest was in seeing far more schools and pupils reaching a benchmark that is accepted by Damian Hinds' colleagues as valid; in that it succeeded so well that the floor targets have been kept by the coalition.

But it is also the case that academic qualifications will not be the answer for everyone: we need more technical and applied options of real value, something Labour tried to achieve with the Diplomas, and succeeded in some like Engineering (according to Tory adviser Sir James Dyson) and IT. And the current Government really does need to decide where it stands on pre-16 vocational qualifications: Alison Wolf thinks they're generally a mistake if they take up more than 20% of curriculum time; Ken Baker wants more technical education from 14 with his excellent university technical colleges initiative. The truth is that the academic core of the EBacc will not be right for every student, which is why Labour focused on English and Maths, and saw substantial improvements in both, especially in the poorest schools. Rather than trading silly insults, perhaps  Mr Hinds, whose Conservative-led education select committee recently damned the EBacc, could assist in resolving the split in his own ranks that really does matter to young people's futures.
Posted by Conor Ryan at 12:31:00 1 comment: 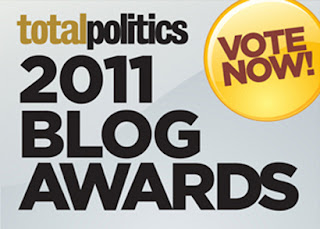 The annual Total Politics awards are now open for voting. If you have enjoyed Conor's Commentary over the last year, please vote for this blog and blogger. In any case, do vote for your favourite blogs so there is a good turnout. You can vote here.
Posted by Conor Ryan at 08:22:00 No comments:

Carol's GCSE maths split could add up to a solution

Carol Vorderman has come up with one very good idea about what to do on Maths, but some of her other prescriptions need more careful thought. Her report for the Conservative Party has attracted standard diplomatic language from Education Secretary Michael Gove, suggesting no great enthusiasm for her findings, but one of her ideas really should be taken forward. Vorderman is absolutely right to argue that GCSE Maths should be split between a functional exam and an exam focused on algebra and trigonometry. It is vital that everyone understands how to calculate, use fractions and percentages; not everyone will master calculus.But it is also important that any functional test is developed with business, if it is genuinely to achieve its aims. Otherwise it could act as a hindrance to achieving wider qualifications - as the Diploma has shown.


However, if a young person gets a good GCSE in functional maths, it is less obvious that they need to continue studying to the same standard to18, as Vorderman recommends: of course maths should be integrated into other courses as appropiate, and those who don't get a C grade at 16 should at least continue to aim for this grade in functional maths. Unless we move towards an International Baccalaureate style exam at 18, it is harder to see how compulsory maths could fit in with our current A levels.

Vorderman's attack on national testing in primary school seems more perverse: teaching to the test has always occurred, and happens at GCSE and A level. The issue is what they are being taught and whether being tested helps youngsters to retain what they have learned. If testing currently doesn't do that enough, improve the tests but don't abandon something that helped improve maths teaching in primary schools (along with Labour's numeracy strategy, which Vorderman launched) considerably. There may need to be a renewal of the energy that the numeracy strategy brought, but it would be wrong to replace testing with assessment at 11; doing so would be a huge setback for primary maths.
Posted by Conor Ryan at 08:32:00 1 comment: