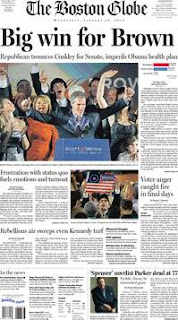 Martha Coakley may be winning awards for ineptitude after her spectacular failure to hold onto Ted Kennedy's seat against the Republican insurgent Scott Brown in Massachusetts last night. And it would be hard to dream up a more inept candidate for a by-election (though some of us remember Labour's sterling efforts in the 1980s). But the result was not just a defeat for Coakley, it was a wake-up call to the White House about Obama's singular failure to communicate to middle America.

Looked at in policy terms, Obama has been a reasonably successful President. Viewed through the prism of foreign policy - aside from the Middle East - he has injected new respect for the USA. But with domestic voters, he has simply failed to engage on the issues that matter.

Healthcare is clearly the issue that has mobilised so much anger and suspicion. Of course it is bizarre that Massachusetts, with far more 'socialised' medicine than Obama's latest plans, should be exercised by this. But people are not concerned about the plans, they are concerned at what they think they will do. In part, that is the fault of the crazed right and Fox News. But it is just as much about the inept way that Obama and his team (and Congress) have handled the issue. Instead of giving people simple explanations and clear choices, they have allowed the whole business to look like a threat cooked up in back door negotiations behind closed doors. That is a failure of leadership and a failure of communication by Obama.

As John B Judis of the New Republic puts it:

Obama’s lack of engagement with middle America has come to the surface and has contributed to his decline in popularity. This shortcoming has been evident in his style and choice of venues--he gave his endorsement of Coakley on Sunday at Northeastern University, in Boston, rather than at a union hall or public auditorium in Worcester or Springfield. It is also evident in his choice of advisors and spokespeople and in the way he has framed his programs.

He chose the former head of the New York Fed, Timothy Geithner, to be his chief economic spokesman during a financial crisis that was widely seen as the product of Wall Street. And in developing and presenting his policies on the banks, he didn’t put the kind of conditions on taxpayer assistance that would have assured middle America that they weren’t giving handouts to the wealthy.

In the case of his health care plan, he did not really have a spokesman, but ceded the public face of the policy to the congressional leadership....Where Obama invited a voter backlash was by letting the burden of reducing health care costs appear to fall on senior citizens and those middle-class workers who had acquired good health insurance through decades of union battles with management, and not on the insurance and drug companies. Obama ceded too much to the policy wonks who were devising intricate schemes to show they could cut the deficit. He took his eye of off the political imperative of keeping middle America in his corner.

The fact is that successful politicians need not only to be developing the right policies, they need to know how to communicate them to the voters. Obama showed his weakness reaching many middle class working people during the Democratic primaries. Many of us hoped that he had learned his lessons from that experience. If last night's results are not to be a precursor for a wipeout in the mid-terms, the President must recognise the need to restore clear messages about what he is doing and how.
Posted by Conor Ryan at 15:53:00