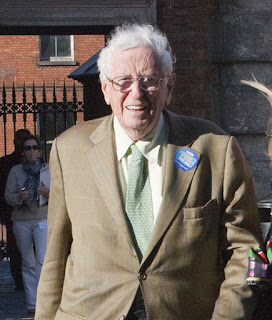 Garret FitzGerald, who died today, was Ireland's first post-nationalist Taoiseach, and in that role he laid the groundwork that has culminated in this week's extraordinary visit of the Queen to the Republic. He was not, truth be told, a hugely successful Taoiseach in policy terms, but his contribution to Irish life far outweighed any of his achievements as head of government. He set a tone of integrity that stood in marked contrast to the corruption of Charles Haughey, his main Fianna Fail opponent. His leadership of Fine Gael and the coalition government marked a sea-change in Irish life, as an intellectual who, while getting elected through the clientilist system, managed to transcend such narrowness to embody what President McAleese called the characteristics of the Renaissance man. An economist, his politics were those of the European social democrat - albeit sometimes at odds with a Fine Gael party led by the ultra-conservative Liam Cosgrave during the 1970s - rather than the scion of a party born of obscure Civil War arguments.

It is a tribute to this intellectual giant that he continued to contribute wise economic and politics analysis to the Irish Times every week until shortly before his recent illness. But the respect he earned was genuine and widespread. In truth, his Anglo-Irish Agreement lacked the subtley to transcend the sectarian divide, but he had understood the need to move forward politically, which would lead in time to the Good Friday Agreement. His social agenda, too, proved premature, and it took time - and the election of Mary Robinson in 1990 and the 1992 coalition with a strong Labour presence - for the advances he supported in areas like divorce to be realised. But as his highly readable autobiography demonstrated, it was not for want of trying. Ireland today is a very different place socially and culturally than it was when Garret FitzGerald entered politics. And that it is owes no small debt to his sense of what it could be.
Posted by Conor Ryan at 17:07:00