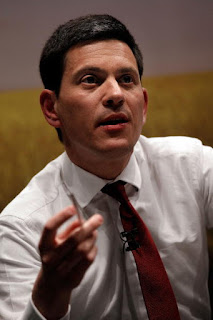 David Miliband has today launched his bid to be Labour leader with an excellent speech that shows he understands why we lost and some of what we need to do to win again (my emphases):

We need to begin with why we lost. The essential problem was simple. In a change election we were perceived to be defending the old order. Future is the most important word in politics; but we looked out of time. Understand this, and we can rebuild. Be brutally honest about it: for too many people, we were not the people’s party that was created 100 years ago, but the politicians’ party. We were perceived by too many voters, our people, as out of touch.

So why did it happen? Because our challenge after three terms in government was renewal. We all agreed on that. Renewal in policy, renewal in culture, renewal in organisation. But we did not manage to make it real. We needed a renaissance of progressive thinking; people thought we had tried to reboot New Labour.

- On policy, we were neither proud enough of our record, humble enough about our mistakes, clear enough about our offer. We saved the NHS but it was not an issue at the election. We lost focus on education and anti social behaviour. We were playing catch up on political reform, immigration and housing. We had many policies which made sense, but they did not convince the electorate we had a coherent vision for the future of the country.

- Let’s be honest about culture too and organisation too. We did not symbolise today’s requirement for openness, participation and dialogue. We talked about new politics, late in the day admittedly, but we did not escape the image of politics as a game not a calling. We drew on our deepest strengths come the election. But an electoral machine is only replenished when it is a genuine social and political movement in the community, able to affect change. That is what many of our MPs have taught us. That is what the whole party needs to be geared to achieve.

The result is that our conversation with the public broke down. We need to restart it with our most precious asset: our idealism for a better future. Idealism is the lifeblood of our party. Not that we think we will build heaven on earth; but that we should try. And that when we create the NHS or legislate for a minimum wage or deliver free nursery education or triple overseas aid we live out our commitments to the brotherhood of man.

The beating heart of progressive values in Britain has not been stilled. In fact the other two main parties spent most of the election trying to steal them from us. What we lost was the sense that the Labour Party could be the vehicle for the implementation of those values.

So we have to put that right. Starting with this contest. Starting with one vow more important than any other: we renounce today re-fighting the battles of the past. The Blair/Brown era is over. I am not interested in politics defined as Blairite or Brownite. New Labour isn’t new any more. We learn from it; we benefit from it; we seek to emulate its successes but not repeat its mantras.

We need new ideas, and new ways of doing politics. New Labour did fantastic things for the country. But now we are out of power, what counts is next Labour. Listening, idealistic, open, engaged, thoughtful, radical, decisive, Labour. We have four tasks that we must address together.

First, we must reconnect our party, its aims, our policies, with our values and our voters. For the mum who works hard and gets tax credits but is fearful about the needles that she finds at her kids’ playground. For the dad who wants to work but whose job went when manufacturing left town. For the teenager who wants to do the right thing but has nowhere safe to go in the evening. I remember the day we committed in government to that inspiring and audacious goal of ending child poverty. It required a massive moral crusade like the Jubilee Debt campaign. Yet what should have been a pulsating movement in every community came to be seen as a technocratic exercise in Whitehall. Politics without values is not just barren; it is unsuccessful.

Second, we must renew our ideology and ideas. The best of the last 13 years is transformative. That new parents expect free nursery places and modern schools; that no political party dares to stand against tackling climate change or raising overseas aid or championing gay rights; that the NHS has been saved for future generations. The mistakes have included flinching from political reform; the lack of responsibility at the top of society; the late realisation that the green agenda is not “environmental” but in fact about economics, culture, security. I stand for individual freedom and social justice. The two traditions of progressive politics in Britain. We succeed when we make them partners, as with the National Minimum Wage or legislation on civil partnerships. We must make them partners again.

Third, we must renew our party. We won an election on May 1st 1997. Party reform stopped on May 2nd 1997. We did not become a movement in our communities rather than just an electoral machine. There is no one way to do that, but it must be done; we must try all of them. Engaging far far better with those three million trade unionists who choose to pay the political levy in what I believe is a positive act of democratic participation; trying what socialist parties around the world have done with experiments like free party membership to become mass networks; building up the connections with civic society that new media make possible. Movement not just machine should be our watchword.

And we must finally be a strong opposition. We are in a unique situation. The Conservatives spent the whole election campaign running against a hung Parliament and they are now in coalition with the people who depend on a hung Parliament for power. Meanwhile the Lib Dems told people to vote for them to keep the Tories out, and ended up bringing the Tories in. So much for new politics. We need to be an opposition which is constructive where possible, and determined, raucus, passionate, obstinate where necessary.

These are big tasks. And we may not have much time to do them. So we need to start in this leadership campaign. We say we believe in new politics. Let’s show it.

The country will not be looking at us carefully in the next few months, but they will notice us; they will be quietly judging our character; they will not follow the details of what we say but they will notice how we behave. So this campaign needs to be a credit to the party. I propose to run my campaign in the following ways, to bring credit to the party: there will be no negative briefing about other candidates; it’s not my way and I won’t be starting now; the people who work for me will be chosen because they don’t do it either; we will tackle unattributable briefing through my named spokeswoman Lisa Tremble; we will listen to every MP and candidate, whether or not they support me, for their ideas about what the country needs and the public want; they’ve just spent weeks on the doorstep and we need to make the most of that knowledge; we will listen to the country as well as campaign in the party; we will take the party and its ideas out into the constituencies we have lost as well as those we have won; and we will raise money for the party; lets face it – the financial disadvantage we faced at the election was made by error not nature; I will start as I mean to go on, giving at least one third of the funds I raise for this campaign into a fighting fund for the next general election.

This leadership election is the beginning not the end. Ideas without organisation is futile; and organisation without ideas is sterile. We know the battleground of politics – not within the party but with the government; the politics of power: we never nailed the Tories on the vacuousness of the Big Society because we did not demonstrate our belief in the empowering state not the big state; the Labour Party was created in part to empower people, and we must never lose sight of that mission

- the politics of protection: what we need to provide ourselves, what the state needs to provide, and what needs to be done together; it’s about rights and responsibilities together, in welfare, in social care, in respect of crime and anti social behaviour
- the politics of belonging: what the world looks like out of your front window, in the semi detached house or the tower block; how much migration, how much change in housing, the local environment, local amenities.

I know the sort of Britain I want to live in. A country where power is redistributed, merit rewarded as well as needs met, global connections celebrated. And I know what sort of Labour Party we need to deliver that Britain: a living breathing movement not just a machine.