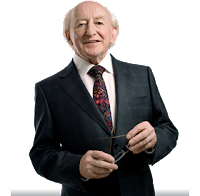 As the Irish Presidential election enters its final ten days, there are just two candidates left standing. Michael D Higgins, the Labour veteran and former culture minister (left), is in what seems like a fairly straight fight with the former Fianna Fail member turned Independent business candidate Sean Gallagher. Two polls appeared yesterday, with each candidate leading one of them. In the Sunday Business Post, Gallagher led Higgins 39-27 while in the Sunday Independent, conducted a little later, Higgins led Gallagher 36-29. Both polls placed Martin McGuinness on around 13%. Yet, to a reader of the British media, especially the Guardian until today, all this would be a great surprise. Surely, they might innocently wonder, this is the race where Martin McGuinness is set to take the prize?

What has happened to McGuinness during the course of the campaign is fascinating. He started the campaign dubbing his opponents 'West Brits', an offensive term of abuse used by Sinn Fein in the past to suggest its opponents were not true Irish people. McGuinness has been forced to confront his paramilitary past in ways that he cannot wholly have expected. The son of an Irish army private murdered by the IRA confronted him, and he was unable to give a satisfactory answer. RTE's Miriam O'Callaghan dared to challenge that past on a TV debate last week, questioning how he squared murder with his religious beliefs, and despite bitter complaints from Sinn Fein, who like to praise their own role in the peace process without acknowledging their role in what went before, 62% of Irish people backed the feisty broadcaster over the petulant candidate.

It is true that Sinn Fein has probably gained a bit of extra support on the 10% it won in the general election earlier this year as a result of the campaign. But by being forced to confront its past in ways that had been largely ignored since the power sharing agreement in Northern Ireland, it has also limited its potential for expansion. And the foolhardy decision to allow McGuinness to leave his day job as deputy first minister will have done few favours to the strength of Northern Ireland governance. Sinn Fein deserve credit for accepting power sharing with the DUP but that neither wipes out their past murderous campaign nor does it give them a god-given right to the Irish presidency.

Even though Gallagher has momentum, Michael D still probably has the better chance of winning. The election is being fought under the single transferable vote system, and he should be he most transfer-friendly of the candidates. Gallagher has been running as an Independent and enjoys fame from Ireland's Dragons Den, but his past membership of a still deeply unpopular Fianna Fail is becoming an issue as his surge brings scrutiny. But after weeks of soap opera - with a saga involving Dana's brother and a family feud providing the latest instalment - there is now a straight fight between left and right in the campaign. I trust the Guardian can now get its reporters to cover the reality of politics in the Republic rather than the wishful thinking of some of its contributors.
Posted by Conor Ryan at 09:51:00