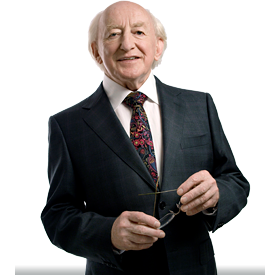 Three weekend opinion polls have now given solid leads to the 'independent' business candidate Sean Gallagher in the Irish presidential election. Gallagher has clearly been unaffected by revelations about his Fianna Fail background or his patchy business record as a Dragons Den presenter. His tactic of contrasting his relative youth with the age of 70-year old Labour veteran Michael D Higgins seems to have paid off and Higgins clearly faces an uphill battle winning this week's poll. Gallagher is running at around 39-40% to Higgins 25-26%. All the polls confirmed that Sinn Fein/Guardian candidate Martin McGuinness is a distant third, with Paddy Power shifting his odds to 50/1 as a result.

But a closer look at the data behind the Red C poll suggests that it will be a lot closer between Higgins and Gallagher than the 14-point gap would suggest. For a start, if one includes only those who will definitely vote (a particularly important indicator if turnout is low), the gap falls to eight points. And then, so long as McGuinness stays in third position (as his transfers will mainly go to Gallagher), Higgins should benefit from most transfers from the other candidates, in the STV election. So there is a lot to play for in these closing days. But Ireland has a pretty clear choice: a vote for the politics that sent it into the abyss, in the form of ex-Fianna Fail member Gallagher, or a vote for a broader more outward-looking culturally astute Ireland as represented by the best culture minister Ireland has had in Higgins. It may not be as defining an election as the 1990 election that saw Mary Robinson win, but it is a pretty defining choice all the same.
Posted by Conor Ryan at 08:53:00