Why Michael D Higgins is set to win the Irish Presidency 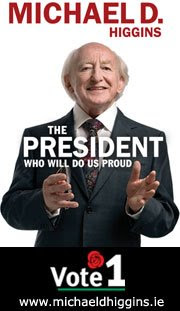 It can take an age for final results to come through in an Irish STV
election, but the country is blessed with some very skilled tallymen. And their tallies point to a clear victory for Michael D Higgins, the President of the Irish Labour Party, as the country's next president. To readers of some of the British media, particularly the Guardian which was practically wetting itself at the prospect (never a realistic one beyond the fantasies of the paper's resident Sinn Fein fan club) of Martin McGuinness finding himself in Áras an Uachtaráin after today, the new president is a virtual unknown. Readers were instead told more recently that if McGuinness didn't cut it, David Norris, an academic  and gay rights campaigner scrabbling for fourth place in the same tallies behind McGuinness, would do it.

To be fair, there have been several 'front-runners' in the campaign. And Norris was there once (though long before the Guardian piece), before he mishandled the release of letters he had written in defence of a friend convicted for underage sex. So, more significantly, was the Irish Dragon's Den entrepreneur Sean Gallagher, who led the weekend polls until McGuinness threw doubt on his integrity by highlighting some of his less savoury links with Fianna Fail. But all through this, Michael D was always likely to win through, as this blog has consistently argued. And that is because, as today's RTE/Red C exit polls confirm, people are more interested in electing someone to the Park who will represent Ireland with dignity abroad and who is of unimpeachable integrity. And Michael D not only scored on both counts, his "A President Who Will Do Us Proud" slogan exactly captured the mood of the electorate. Even if he hadn't topped the poll, he was always the most transfer-friendly.

Michael D is a long-time politician of the left, a poet and academic, and the finest culture minister that Ireland ever had. Each of the other candidates had different flaws exposed during the campaign; and each time Michael D was there rising above the fray. The only criticism made of him was his age, and that may have backfired as a younger but testier Sean Gallagher came unstuck. He fought a long game, fought it steadily with a brilliant Labour back up team. And he was there when the last of his rivals fell at the final hurdle. Since 1990, under both Mary Robinson and Mary McAleese, Ireland has benefited from two fine Presidents. Both in their different ways transformed what had been a tired sinecure for failed or retired politicians into a significant symbol of the new Ireland. That tradition will undoubtedly be upheld by Michael D.
Posted by Conor Ryan at 13:23:00

I'm just relieved Martin McGuinness didn't win. That would not have been a good thing for either the North or the Republic!