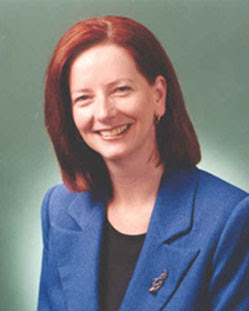 The extraordinarily brutal way in which the Australian Labor Party has despatched its leader, former PM Kevin Rudd, as his net popularity dipped from record positives to below zero, may have brought wry smiles closer to home. But his successor, Julia Gillard has a formidable record as Deputy Premier in seeing off the teaching unions as she introduced national testing and published results, courage which should stand her in good stead as PM. The contrast between her readiness to press ahead with important policy in the face of vested interests and Rudd's pusillanimity on carbon trading has been stark, with the latter a turn-off for voters. With Gillard in charge, the ALP now has a fighting chance of keeping power in this year's elections against a very right-wing Liberal challenge. Let's hope she does it.
This post has been picked up by John Rentoul.
Posted by Conor Ryan at 12:28:00

To be honest, with the Australian elections so close, I doubt she will have much time to implement any noteworthy education policies.

Might be interesting to see what the various parties promise in their manifestos, though.