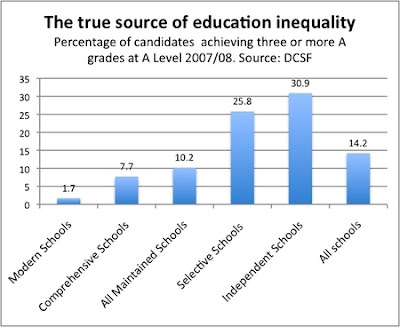 Fraser Nelson also inadvertently demonstrates the fallacy of the attack in many papers today on the notion that more should be done to encourage bright youngsters with potential to aspire and apply to our elite universities. He publishes this table in an effort to show that comprehensive schools are rubbish.
Of course, what he ignores is the fact that a selective school chooses only the top 25% of pupils in a given catchment area - and often a tighter group than that given their paucity - so it is absurd to compare its exam performance directly with that of a comprehensive school, where though there will often by a 5 A-C at GCSE expectation for A-level groups, the cohort will be much wider in ability than a grammar or independent school. Without such weighting, the comparisons are pretty meaningless. He has also ignored sixth form and FE colleges for his comparison. When these are added in, a total of 14,893 students gained 3As from 'comprehensive schools' last year compared with 5,470 in selective schools and 10,680 from independent schools. Certainly still not as good as they should be doing, but the key point being made by the Sutton Trust is that pupils gaining 3As from state schools are less likely than those from independent schools to go to a top university.
And here, exam results aren't necessarily the biggest problem. It is the lack of ambition of students and some teachers in too many comprehensives. It is the failure to guide students towards the right subjects. And it is a lack of the sort of self-confidence and self-belief that often comes with a public school education. A growing number of comprehensives, including Academies, are starting to recognise this. Whether students might benefit from the allocation of scholarships to the best achievers in certain inner city schools or some recognition of potential beyond A levels - what is hilariously called 'class war' - matters less than whether they gain these attributes, and do so from an early stage in their secondary education.