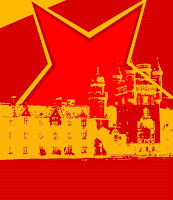 We saw the revival of Michael Frayn's 1978 farce Balmoral at the Theatre Royal Bath. This is the story of an imaginary gathering of writers in 1937 at the freezing Balmoral Writers Retreat (no longer occupied by any Royals) in Soviet Britain, after the 1917 rising took place in the UK rather than Russia. It is an entertaining farce based around four writers at the retreat in the depths of winter, but lacks any real political bite. There are amusing touches, not least as the writer of erotic verse Enid Blyton discovers her true vocation and the Beaverbrook Royalist hack Godfrey Winn is portrayed as a slavish supporter of the State's version of the truth.
Despite this, the play is more slapdash comedy than serious critique. It was served well by a competent, if slightly raucous cast. Rik Mayall was supposed to play Skinner, the warden of the house, and was ably replaced by Steve McNeil. In any event, his seemed a lesser role than that of the 'butler' and general factotum, McNab, played here comedian Andy Gray, but played by Fulton Mackay in the original seventies production.
Posted by Conor Ryan at 12:02:00