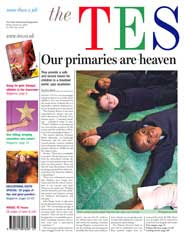 I have a comment piece in today's TES, making an unfashionable case for politicians to take decisions, and arguing that they are more likely to be guardians of standards than supposedly independent quangos. You can read the piece here. Here's an extract:

"I doubt that making the exam regulator more independent will stifle the sneerers so long as we still have competitive eam boards with little incentive to make exams tougher. Or a sytem of marking where an A or a B, a Level 4 or 5 varies in value from year to year, and paper to paper. Nor will it alter the mindset of commentators who long for the days when few went into higher education rather than the 42% of young adults who go to university now.

"But there’s a more fundamental problem here: independence reinforces the notion that politicians can’t be trusted. Yet because they are elected, politicians are more likely to act as guardians of standards than independent agencies, especially where those agencies become creatures of a prevailing professional orthodoxy....Schools and education policy should not be the preserve of the professional elite. If society – through the ballot box – wants standards maintained or improved, then their elected politicians should be held accountable for providing that reassurance.

"But they can’t do it by handing all their power to unelected quangos, whose instincts may be towards introducing measures that militate against what the public wants.... Of course ministers should have no power over grading decisions. That would be wholly improper. But they should be able to make strategic policy decisions in the public interest, including whether to allow coursework, permit resits or have national tests for 11 and 14 year-olds. And teaching unions or teachers who don’t like such policies should be able to influence, criticise and quiz ministers, in the same way that parents, students and employers can. However, without responsibility, politicians have no power."